The Hearing With Oliver Stone

Book Excerpts: the Hearing With Oliver Stone: A Heroic Moment for Our Protagonist

Congress created the Assassination Records Review Board in 1992. The law aimed at ensuring that virtually all records generated by previous investigations or held by government institutions related to President Kennedy’s assassination would be turned over to the National Archives. Its enactment resulted from the continuing debate about the conclusions of the Warren Commission and other investigative bodies that gained in intensity and public acceptance with the release in 1991 of Oliver Stone’s JFK. Congressional Hearings on the Need for Legislation

The Review Board acknowledged the significance of Oliver Stone’s film in providing the impetus for the law creating the board. It reported that the film “popularized a version of President Kennedy’s assassination that featured U.S. government agents from the Federal Bureau of Investigation (FBI), the Central Intelligence Agency (CIA), and the military as conspirators.” Although the Review Board described the film as “largely fictional,” it endorsed Stone’s message in the film’s closing trailer “that Americans could not trust official public conclusions when those conclusions had been made in secret.” Therefore Congress passed legislation—the JFK Act—“that released the secret records that prior investigations gathered and created.” 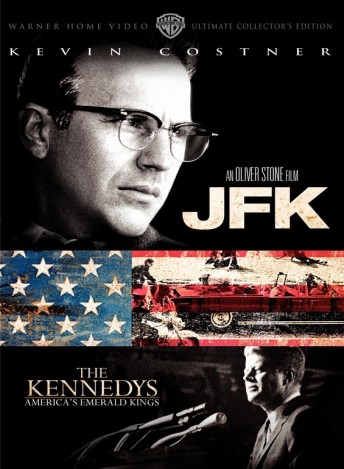 The Review Board’s characterization of the film as “largely fictional” was certainly correct, if understated. Members of the commission staff were offended (but not really surprised) by the liberties taken by Stone in inventing facts surrounding the assassination. Although including in his film some of the more familiar conspiracy contentions dealing with the number of shots and the “magic bullet,” Stone portrayed Oswald as a “patsy” who did not fire any shots at the president. Instead, the whole scene in Dealey Plaza was staged to make it seem like he did, in order to conceal the fact that several gunmen were shooting at Kennedy from different directions—a crossfire.

David Belin spoke before the National Press Club in Washington, DC, on March 26, 1992, about the movie in a speech entitled “The Assassination of Earl Warren and the Truth.” Belin began his attack on Stone’s film by quoting Warren to the effect that “one person and the truth is a majority.” He characterized Stone’s film as an effort to impeach “the integrity of a great Chief Justice.” “Earl Warren is not the only victim,” he went on to say, “Stone calls the assassination a ‘public execution’ by elements of the CIA and the Department of Defense, while President Lyndon B. Johnson is called an accessory after the fact.” Because Stone had cited the Select Committee’s report as support for the “facts” dramatized in the film, Belin itemized the respects in which that report corroborated the conclusions of the Warren Commission.

What angered Belin even more than Stone’s lies, omissions, misrepresentations, and manufactured facts was the massive amount of money spent by Warner Brothers and Stone to rewrite history. He said: “One of the most dangerous aspects of the disinformation of JFK is how the television networks in their quest for ratings have helped promote the lies about Earl Warren and the Warren Commission.” Belin urged the press to “expose the corporate incest between huge Hollywood empires and the television networks and the danger that this poses to our democratic society as they rewrite the truth to fit their own mold.” Referring to his Rockefeller Commission experience, he said: “No one knows better than I the dangers to a free society that are posed by a CIA out of control. But from my perspective, I see an equally great, or perhaps even greater, long-range danger to our democratic institutions of government with the increasing control by the entertainment industry over our national media, particularly television.”[i]

Stone’s movie, Belin’s speech, and the likelihood of congressional action prompted several commission lawyers to discuss how we might best respond to the movie and support legislation making assassination records public. Burt Griffin recalled that he, Liebeler, and a few others met with me in Washington, and we also communicated with Mosk in Los Angeles and Redlich in New York. In early 1992, more than a dozen staff members signed a letter to the National Archives urging release of all Warren Commission materials, emphasizing the commission’s (and our) desire back in 1964 to make all of our records available for public inspection, except those with a national security classification. In an accompanying press statement, we reaffirmed our confidence in the commission’s conclusions about Oswald and the lack of any credible evidence of a conspiracy.[ii]

Early in January 1992, Congressman Stokes, the chairman of the former House Select Committee on Assassinations, introduced H.J. Res. 454 with forty sponsors that would mandate the release of assassination records. I appeared [at the hearing with Oliver Stone] on April 28 representing the commission staff at the first hearing on this legislation. Building on the staff’s earlier public statement, my prepared testimony expressed strong support for making public all of our commission’s materials as well as those of the House Select Committee, which were being withheld from publication for fifty years. I emphasized that only two percent of our commission’s records (about three thousand pages) remained undisclosed and would be subject to review by any agency created by Congress for this purpose.[iii]

The hearing was conducted by the Legislation and National Security Subcommittee of the House Committee on Government Operations chaired by Congressman John Conyers (D. Mich.), a friend of Congressman Stokes and a powerful advocate of the conclusions reached by the former House Select Committee. It was held in a large hearing room featuring a full battery of TV cameras and spectators competing for the available seats. It was clearly the congressional event of the day in Washington for one reason only—the most prominent supporter of the bill was Oliver Stone. Hoping to avoid the penetrating glare of the TV cameras, I sat down on the far end of the table for scheduled witnesses and studiously examined my prepared statement. My desire for anonymity failed with the entrance of Oliver Stone, who sat at a small table about twelve feet directly in front of me, so that the cameras immediately focused on him and I was part of the background.

The hearing began with a brief statement of its purpose by Chairman Conyers and testimony in support of the legislation by Stokes. When he welcomed Oliver Stone as the next witness, Conyers said: “Welcome, Mr. Stone. We have your prepared statement. You are probably the reason that we are all here today.”[iv]

[At the hearing with Oliver Stone] In his prepared comments Stone described the two conspiracies that led to the assassination of President Kennedy and the cover-up that had prevented the members and the American public from knowing the truth. According to Stone, the second and broader conspiracy involved President Johnson, whose “appointment of the Warren Commission was a means by which to derail a serious homicide investigation which was never accomplished.” As one Washington Post reporter described Stone’s film: “Stone mixes fact and fiction at dizzying speed, stomping on presumptions of innocence, cooking up fake admissions, ignoring contrary evidence, and giving a conspiratorial tone to inconsequential facets of the tragedy that were explained long ago.” His testimony did likewise.[v]

After Stone’s prepared remarks, the committee members eagerly sought the opportunity to express their fascination with his presentation and their admiration for his courage in bringing these conspiracies to the committee’s attention. They solicited further details regarding Stone’s conspiracy theories and, needless to say, Stone was not reticent in responding to their questions. Not one committee member felt obligated to ask whether Stone had any factual support for his views or his rejection of the conclusions reached by the Warren Commission and the House Select Committee.

By the time I was called to the podium, I had decided that my staid presentation in support of the legislation had to be amended to deal with Stone’s presentation and the committee’s apparent lack of interest in the facts. Early in my comments, I suggested that Stone was a far better film producer than a historian. I went on to defend the conclusions of the Warren Commission. But I never had the courage to ask the committee members whether any of them had read the Warren Commission report.

When Chairman Conyers asked for my “theory of the JFK assassination,” I stressed once again my view “that there are no facts, as distinct from allegations and suspicions, that undercut any of the major conclusions of the Warren Commission.” He responded: “You don’t have any nagging doubts?” I mentioned the commission’s emphasis on the lack of credible evidence of any conspiracy, and he repeated, “So you do have some nagging doubts.” After my further defense of the commission’s conclusions despite the failures of the FBI and the CIA, we had this exchange:

Mr. Conyers: But you still have nagging doubts.

Mr. Willens: If you are suggesting I have nagging doubts about the conclusions—

Mr. Willens: That is why Mr. Stone could make his movie.

Mr. Conyers: Right. And that is why you may have your nagging doubts.

Mr. Willens: And I have my reservations about what the future will display. But I want to reiterate there have been no facts that have come to light in the last 28 years that have undercut any of those conclusions.[vi]

After Chairman Conyers and I continued this exchange to our mutual dissatisfaction, Representative Shays intervened: “Mr. Willens, I love your spirit, and I think I love your spirit more because it is not as popular to take your view. So I thank you for being true to your beliefs and expressing them so strongly.” He then proceeded, very cautiously, to probe whether I might be comforted if and when more information about the assassination was released to the public. I agreed that would be useful and then said: “And to the extent that I have spoken with passion and vigor, I apologize. It is a characteristic flaw. I think that I wanted to draw a distinction between facts on the one hand and allegations, rumors, and suspicions on the other.”[vii]

My critical comments of Stone’s movie and spirited defense of the commission led, somewhat surprisingly, to comments from the audience. When I reminded the committee that the Select Committee’s reliance on acoustics evidence had been rejected by the prestigious committee appointed by the National Academy of Sciences, a voice from the audience shouted “It has been refuted!”—or something to that effect. While I was being challenged by one committee member, my young nephew from rural Western New York, attending his first congressional hearing, urged me on by shouting from the rear seats in the room, “Eat his lunch, Howard!” When I finally ended my testimony with one more declaration that not one fact had come to light since 1964 that undercut the commission’s conclusions about Oswald and the lack of any conspiracy, committee members responded with quiet smiles of sympathy for my deluded state of mind.[viii]

[ii] Griffin, interview by author, November 28, 2012. The letter and statement are attached to my written statement before the Subcommittee of the House Committee on Government Operations on April 28, 1992.

[viii] When Belin testified before the Conyers subcommittee on July 22, he repeated the major points of his National Press Club speech about Stone’s film. In a characteristic show of bravado, he challenged the members of the subcommittee to ask him any question whatsoever about the Warren Commission’s findings and expressed his confidence that he could answer any such query. Belin took a position on the proposed legislation far beyond what I had advocated on behalf of the commission staff; he recommended that Congress mandate release of all—repeat all—assassination records regardless of any national security classification that they might have. Statement of David W. Belin, Former Counsel, Warren Commission, and Former Executive Director, Rockefeller Commission, before the Legislation and National Security Subcommittee of the House Committee on Government Operations (July 22, 1992).